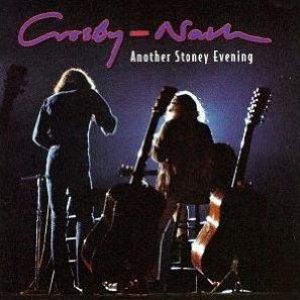 Another Stoney Evening is a live Crosby & Nash album recorded at the Dorothy Chandler Pavilion in Los Angeles, California on October 10, 1971, and released in 1998 by Greatful Dead Records. After the tour of Crosby, Stills, Nash & Young that ended in July 1970, the quartet broke up amidst some tension. All four members then pursued solo careers, each releasing an album within the next year. Nash and Crosby had developed a symbiotic musical relationship and so decided to undertake a tour as a duo during the autumn of 1971. They opted to go out without any backing band, playing theaters in what would later be termed an "unplugged" format. They were so pleased with the results that they recorded their first duo album in the spring of 1972. Following the release of that album, the duo toured with a backing band in 1973 (including, at different times, David Lindley and future Eagles guitarist Don Felder. The repertoire for this Crosby and Nash tour consisted of mostly previously released songs, some of which had appeared on Crosby and Nash's respective 1971 solo albums If I Could Only Remember My Name and Songs for Beginners. Four new songs would end up on the 1972 debut Crosby and Nash album: "Southbound Train"; "Where Will I Be?"; "Strangers Room"; and "Immigration Man." The title for the album comes from a bootleg of the period entitled A Very Stoney Evening, from a show on the tour mistakenly attributed to the evening of this recording. User-contributed text is available under the Creative Commons By-SA License; additional terms may apply.